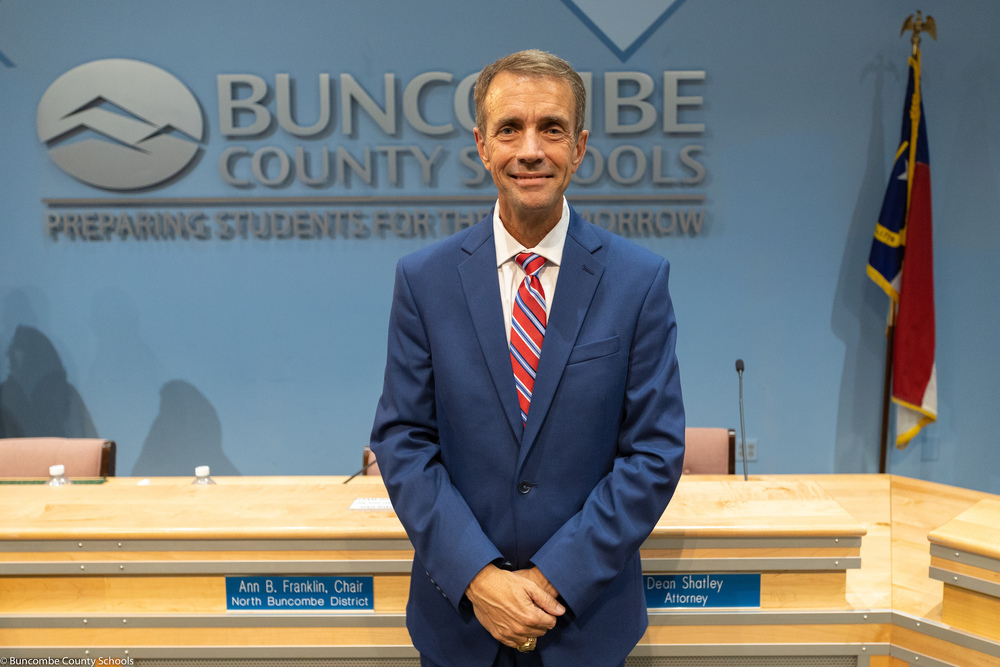 The Buncombe County Board of Education is pleased to announce the appointment of Dr. Robert (“Rob”) Jackson as the new Superintendent of Schools. Dr. Jackson will succeed Dr. Tony Baldwin as Superintendent, who is retiring after serving over 13 years as Superintendent and almost 40 years as an educator in North Carolina.

A native of Buncombe County, Dr. Jackson grew up and attended school in Swannanoa. After serving in the United States Navy, he began his career in education as a student data manager and summer custodian as he worked his way through Asheville-Buncombe Technical Community College and Western Carolina University to earn his degree to become a teacher. Dr. Jackson worked in Buncombe County Schools for nine years, as a classified employee and then an elementary school teacher. Dr. Jackson also has a notable history as a school administrator serving as an assistant principal in Gaston County and as a principal in three schools in Union County. In Union County, Dr. Jackson had the unique honor of serving as the inaugural principal for two different schools, Marvin Elementary School and Cuthbertson High School. In 2014, Dr. Jackson was named Superintendent of Edenton-Chowan Public Schools in eastern North Carolina, a position he held for six years before being named to his current role as Superintendent of Carteret County Public Schools.

“We are thrilled to welcome Dr. Jackson back to Buncombe County Schools,” said Ann Franklin, Chair of the Board of Education. “Dr. Jackson is an accomplished education leader, and the Board looks forward to working with him to further the success of the district and our students. We believe his history and knowledge of Buncombe County will allow him to make an immediate and positive impact."

"As a former student and staff member and as the parent of Buncombe County Schools graduates, I am incredibly honored and excited by the opportunity to serve the children, families, and community of Buncombe County," said Dr. Jackson. "The academic, artistic, and athletic success of Buncombe County Schools students is a testament to the care and dedication of the teachers, staff, and administrators and of the tremendous partnership with parents and caregivers. I look forward to re-joining this amazing team as together we seek to prepare each and every student for a lifetime of success."

Dr. Jackson earned his Bachelor of Science and Master of School Administration degrees from Western Carolina University and holds an Education Specialist Degree and Doctor of Education from Wingate University.

The date in which Dr. Jackson will start as Superintendent is pending and should be finalized in the next couple of weeks.