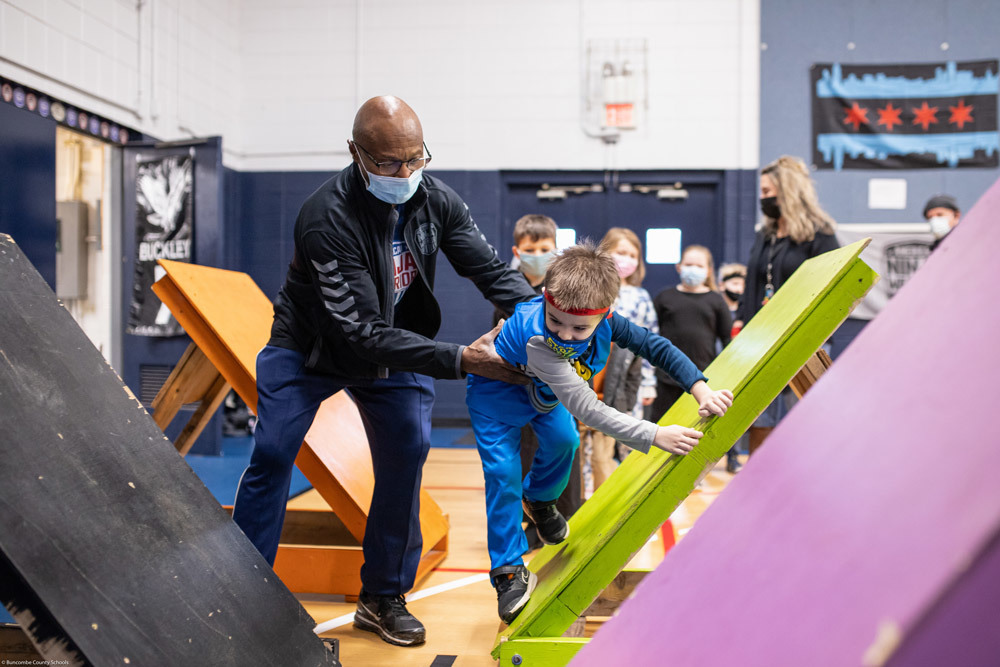 A ninja-themed dream came true for first grader Derek McGinley on Feb. 4 thanks to the Glen Arden Elementary School community and a local real-life “ninja.”

Prior to an out-of-state bone marrow transplant that will require months of recovery, Derek’s last-day-of-school wish was to experience an obstacle course modeled after the popular “American Ninja Warrior” television program. Eager to show Derek he is loved and strong enough for the challenges ahead, Glen Arden staff and deputies from the Buncombe County Sheriff’s Office set to work creating an unforgettable experience.

“It almost brought me to tears because he is the sweetest, sweetest boy," explained physical education teacher Paul Buckley. “When I got an email that his dream was to have a ninja warrior day in his physical education class, the only thing that came to my mind was, ‘what can we do to make this happen?’”

Derek's upcoming procedure will help treat a rare genetic condition that affects blood in his brain and causes pre-leukemia symptoms. He was diagnosed this past fall and is one of only 25 people in the world with a similar condition. Glen Arden's staff and Parent Teacher Organization have been part of his family's journey from the start, helping them prepare for their time away and raise funds for treatment.

On Friday morning, Derek was dressed in his favorite ninja wear. With his family by his side, he led the class outside toward the gymnasium where he was greeted by a line of cheering deputies. Behind them, a row of police cars and a SWAT vehicle were parked with blue and red lights blazing. Derek was speechless as he peered through the open gym doors. The spacious room was filled from end to end with obstacles and climbing equipment, just as he’d dreamed.

But there was another surprise waiting for him.

Ready to lead Derek’s class alongside Mr. Buckley was American Ninja Warrior star and olympic gymnastics coach Miles Avery. Avery greeted Derek with a friendly fist bump and a smile. He then explained each obstacle and let Derek be the first to complete the course.

Avery said celebrating Derek brought tears to his eyes and joy to his heart.

Derek and his classmates gleefully explored the course for nearly an hour. Near the end of their time together, Glen Arden School Resource Officer Melanie “Mel” Robbins presented Derek with a special medal and a “Team Derek” ninja backpack, complete with plastic samurai swords. Avery presented Derek with an American Ninja Warrior t-shirt and an invitation to train with him anytime at his Fletcher-based gym, the OSEGA Dream Academy.

Derek may have felt like he was meeting his hero, but on that morning, Derek was the hero.

The boy said he likes ninjas because they fight bad guys and save cities. He also described the strength that they bring to each obstacle on the television show. In the challenging days ahead, however, it will be Derek’s strength and courage that are admired, inspired by the love of his family, friends, teachers, and community.

“The school has been really amazing,” said Derek’s mother Aimee McGinley. “Everybody has done such a good job encouraging him and helping him have that sense of normalcy where he can thrive. He’s going to go through this big thing, but he will feel supported.”